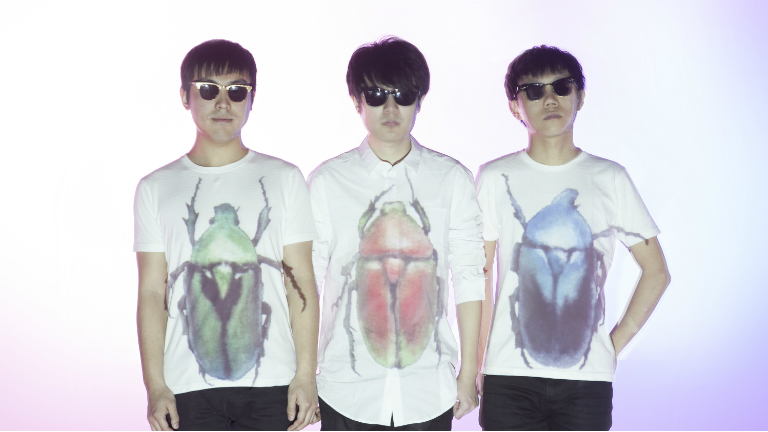 The place where Carsick Cars practise feels more like a bunker than a rehearsal space. Located in the basement of a parking garage near Deshengmen, the space is hidden in a maze of underground tunnels that are lit with a sickly yellow light and smell of piss. Walking down the ramp, we descend into the passageways and promptly get lost. After asking directions from a pair of confused-looking women and a guard who suggests that we ‘just go, uh, look around…’, we decide to wait for frontman Zhang Shouwang, who soon pulls up in a cab and hobbles out on a pair of crutches. It’s a war injury he sustained several months back while jumping off the stage at Midi Festival in Shanghai – the latest in a series of setbacks to delay the release of their upcoming album, 3.

‘It can be a little confusing,’ he says, leading us around a series of corners until we’re finally met in front of a metal door by bassist He Fan and their drummer, Monkey.

‘Do you have the key?’ Zhang asks them.

‘Is it in the hiding place?’ Zhang makes his way down the hall and stands on his tip-toes, feeling along the top of a doorframe. He shakes his head. ‘It isn’t there.’

He calls Wang Xu, the drummer for his side project, White+, who’s currently at XP getting ready for their New Year’s Eve show. ‘Do you have the key?’ Zhang asks. He’s silent for a moment. ‘Well why’d you take it?! We only have one left!’

Next door, Zhang’s former bandmates, Li Qing and Li Weisi, who play in Snapline as well as their own noise project, Soviet Pop, lounge on a couch looking sleepy. They rent the room just to the right of Carsick Cars; to the left are Hedgehog. After a few minutes of unsuccessful wrangling with Wang Xu, the two Lis offer up their own space for the interview. They’ve finished practising for the day, they say, so they’re just hanging out. It seems like the ideal solution – until we get to the first question.‘

This is your first album with a new lineup – why did you originally want to work with He Fan and Monkey?’

Zhang clears his throat. ‘Well first of all, when Li Qing and Li Weisi left… left…the uh… the band…’ We all look over at the Lis, who are sitting in the doorway, smoking cigarettes. They give a little wave. Awkward laughter. ‘Anyway, He Fan and Ben Ben and I had already been playing together for fun, and it was very natural for us to just keep on going as Carsick Cars. Then of course Ben Ben left the band, so we struggled for a while before finding Monkey…’

Struggle has been the key word for Carsick Cars ever since the Lis decided to leave the band near the end of 2010. Though their replacements were already well-respected in the scene – bassist He Fan for his band Birdstriking, and drummer Ben Ben for Boyz & Girl – the move was widely bemoaned as the end of Carsick Cars. It was, after all, the Lis who first started the band with Zhang in 2005, and helped write the two records that put them on the map as one of China’s most important young indie acts. The new lineup seemed promising, however, and within a year, the new trio had locked into place and begun writing together – and then Ben Ben left.

‘By the time Ben Ben joined, we were planning to record a new album, because it had already been two years since the last one [2009’s You Can Listen, You Can Talk], but then of course there were all these member changes,’ Zhang says a little ruefully. ‘So this album is kind of special because it took so long. All the songs have different emotions because they were written at different periods over the last five years.’

[Continue reading at Time Out Beijing.]