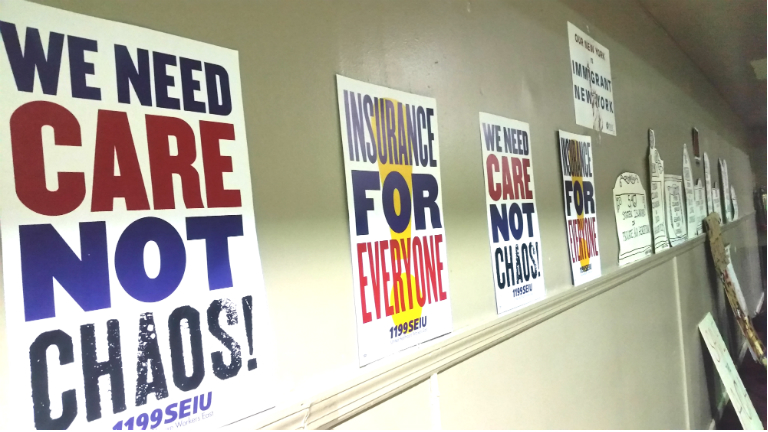 By 6:30 p.m. on a recent Thursday, the Central Family Life Center, a community center in Staten Island’s North Shore, was almost full. Energy crackled throughout the crowd of roughly 100 who’d gathered to discuss the local implications if Congress follows through on President Trump’s promise to repeal the Affordable Care Act. One person, however, was conspicuously absent: Republican representative Dan Donovan.

That didn’t stop his constituents from letting loose.

“We pay for Congress. Congress has excellent insurance. Why can’t we have Congress care?”

said one audience member, a small business owner by the name of Patricia Willis, to a burst of applause.

The event was just one in a string of recent protests in the famously conservative borough – evidence, organizers say, of an emerging progressive movement galvanized by President Trump’s agenda. In the months since the election, at least half-a-dozen progressive groups have formed in Staten Island, and older groups say they’ve seen a surge in interest. Yet organizers say they’re still facing a number of challenges – not the least of which is a conservative culture that’s made many liberals fearful of taking action.

“Most people are scared,” said Teri Calieri, who helped organize the town hall, and leads Staten Island 4 Change, a grassroots progressive group formed in 2008. Case in point: in a conference call prior to the event, she recalls that some of the other organizers didn’t want to promote it because they were afraid of a backlash.

“There was just this fear that all these Trump people were going to come in and shout us down,” she said.

It wasn’t such crazy idea. Calieri herself has witnessed Trump supporters screaming obscenities at protestors gathered outside Donovan’s office. Those kinds of incidents, organizers say, have led many Staten Island liberals to believe they’re all alone.

“There’s a feeling of being an island on an island here,” said Julienne Verdi, who recently founded the social justice group Move Forward Staten Island.

That, she added, has led to brain drain, as young and liberal residents seek out likeminded communities in other boroughs.

One of the groups that’s actively working to combat that brain drain is the Staten Island Democratic Association, one of the oldest political organizations in the borough. The group recently elected its first black president – Bobby Digi, a longtime activist who says he’s bent on bringing in fresh blood.

“My vision is very bold,” he said, adding that he’s targeting college students in a bid to double the group’s membership. “I feel once you get the students involved you can really start to shake things up.”

A greater challenge will be drawing in members of the community who either aren’t politically engaged or support Trump. The latter make up a majority of Staten Island residents, at least according to the numbers: In the presidential election, 57 percent voted for Donald Trump, compared with 40 percent for Hillary Clinton.

Lifelong resident Christine Mantz, who runs a company that organizes daytrips for locals, doesn’t need stats to tell her about the political leanings of her neighbors.

“Living here is a nightmare,” she said, describing daily clashes with neighbors who make racist and anti-immigrant remarks. While she said she’s been encouraged by protest trips to Brooklyn and D.C., she’s less hopeful about the ability of progressive groups to effect change in Staten Island.

“This is the frustration – how far is this going to go?” she said. “This is a Republican town; nobody wants to hear anything and they get nasty.”

It’s a common feeling among new activists, Calieri said – one that she’s trying to change.

“Yes Staten Island voted for Trump, but we also voted for Obama in 2012,” she said. “There’s this real fear people have that cripples them – ‘I’m not going to do anything on Staten Island because these people are just right-wing conservatives and they won’t listen.’ But they do. There is a chance.”