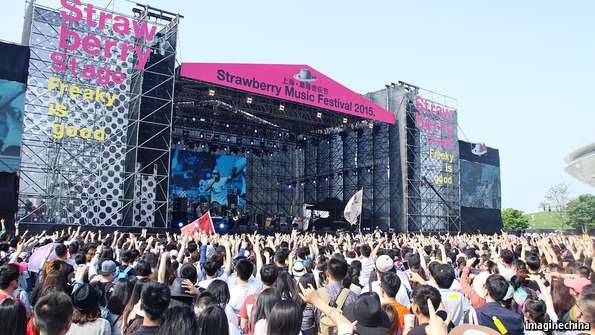 CRACKDOWNS in China often unfold without explanation, carried out by officials acting on directives that never see the light of day. A veteran journalist, Gao Yu, was jailed last month for seven years for revealing the existence of a campaign against the discussion of Western political ideas. The Communist Party document that ordered it was a state secret, the court ruled. Rock musicians, at least those of a more rebellious stripe, therefore have had cause to worry of late. Even at the best of times their concerts are prone to cancellation by officials for unclear reasons. In recent weeks, however, this has been happening more often than usual. Many suspect the party of losing patience with rock music’s more rebellious fringe.

The 330 Metal Festival had been held without a hitch since 2002. This year the daylong bash was, as usual, to have featured heavy-metal bands whose very names sound calculated to annoy the party’s prudes: Crack, Massacre of Mothman and Suffocated (330 refers to the birthday on March 30th of the festival’s organiser, a guitarist with Suffocated). But a few hours after the event opened—two days before the guitarist’s birthday—the police arrived at the venue, a nightclub in Beijing called Tango. They demanded the festival be shut down for safety reasons.

The police may have been right to worry. There were 1,300 people dancing inside. Many took part in a routine called siqiang (“wall of death”) in which audience members divide into two groups and charge at each other. Memories are fresh of a stampede by outdoor revellers in Shanghai on New Year’s Eve that left 36 people dead. Officials have been more cautious since then about large public events.

[Continue reading at The Economist]