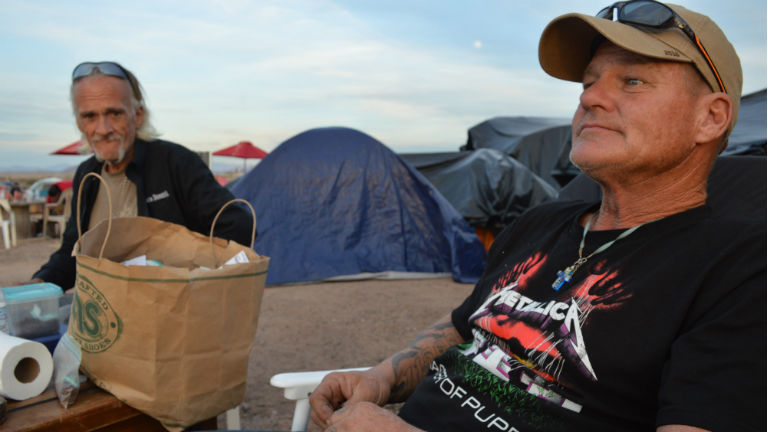 For years, homeless camps have dotted the banks of the Salt River, which curves through the desert, along the northwest border of Mesa, Arizona. The riverbed is dry for most of the year, and the landscape — sloping ravines, dotted with trees — offers privacy from the road.

Around the fall of 2015, word began to spread about a new campsite that was different from the others. It was called Camp Alpha, and, word was, it had supplies, security, and free meals every day.

Tim Johnson, 56, heard about the camp in the fall of 2016, a time when he was feeling extra fatigued. He’d struggled with addiction, and spent the last few years bouncing between jail and homelessness.

When a friend invited him to check out the camp, Johnson agreed.

He was exactly the kind of person Alpha wanted to join. A group called Veterans on Patrol had recently launched the military-style camp as a base of operations to find and recover homeless vets.

Johnson began helping out with daily operations, and in the fall of 2016, was chosen as Alpha’s new camp commander — a role that made him proud.

“Camp commander comes with a big thing,” he said a few months later, sitting in his tent. He described a role that was somewhere between mayor, disciplinarian and mother hen.

“Failure is not an option here. Not in my job. And there isn’t anything in this world that I wouldn’t do for these people,” he added.

But less than a year later, Camp Alpha was gone — and so was Johnson.

At the end of 2009, the U.S. Department of Veterans Affairs announced an ambitious plan to eliminate veteran homelessness within five years. It’s made considerable progress, cutting the number of homeless vets across the country nearly in half, from roughly 80,000 to around 40,000.

Even before that, the White House began trumpeting success in multiple cities — including Phoenix, which, at the start of 2014, was recognized as the first city to end chronic veteran homelessness.

But Lewis Arthur says that’s not what he noticed on the streets. He’d recently moved to Arizona, and encountered a sizable population of homeless veterans in and around Phoenix. Arthur was an activist with the Warfighter Rights movement, which focuses on veteran post-traumatic stress disorder and suicide.

Arthur wonders how many homeless veterans there really were in the area. While on a one-man march to raise awareness about veteran suicide, Arthur says he met scores of homeless vets.

When Arthur embedded with a group of homeless vets and discovered that many were targets of violence and theft — that was a turning point.

He says local drug gangs were preying on the homeless.

“They were tipping over veterans in wheelchairs,” he said. “The first week of every month, these guys get checks. They steal their checks and Obamaphones (government-subsidized phones). And these guys were defenseless.”

Arthur gathered a bunch of guys to walk the streets each night as a sort of vigilante force — and Veterans on Patrol was born.

As the group pulled more and more vulnerable veterans into its orbit, Arthur says the group’s mission shifted from protection to rehabilitation.

For years, he’d been trying to figure out the best way to approach veteran suicide, which spiked in recent years.

“I found that the returning soldiers coming back from Iraq and Afghanistan, they don’t know how to assimilate to our society,” he said.

Arthur says they’d become so used to operating as a team — or, as he puts it, a brotherhood. He thinks the shock of losing that connection leads the alienation some recently discharged veterans feel.

His solution — put them to work helping the older veterans, many of whom were in bad physical and mental shape after years of homelessness.

“When I put them with Korean and Vietnam War vets, they were seeing that they could survive and that their problems were nothing,” Arthur said.

It also gave some former soldiers a sense of purpose, which Arthur says many of them lose when they leave the military.

“If you give a soldier a mission and a battle buddy, he’s already programmed,” he said. “Once you do that, there’s no stopping him.”